As promised, I am finally getting around to writing my creepy retelling of what happened to me just over a week ago. I hope it encourages you to take precautions - because it was too close for comfort for me.

I have always been an anti-social runner. It's not that I don't enjoy company or competition, but it is just my personal time to clear my head - so I go alone. I have been running circles around Southeast Wisconsin for the last seventeen years, so I feel like I have a pretty good handle on the hazards: the good areas (and the bad,) the big scary dogs, the unsafe intersections, etc. I try to take the proper safety precautions: I run with mace; I stay on main roads; I wear high visibility/reflective clothing; I always let people know which route I'm taking and when to expect me back home.

I was running a 14 mile out and back at around noon. The route takes me through the nicest parts of my hometown. The entire length of the route follows Lake Michigan, so it is full of great views, huge homes, busy streets and lots of cute paths. The last 10% of the route gets a little bit isolated - edged on one side by the lake and industrial buildings on the other. Behind those buildings is a rather unsavory neighborhood that has its share of crime. I only entered this area because I needed the extra mileage and I have run there a million times before.

As I was running, I noticed a faint squeaking sound behind me, so I turned around. Sure enough - a green Cadillac following fifteen yards behind me matching my pace. At first, I didn't think much of it and I kept running. About thirty seconds later, I turned around - still following me. I started to get scared, because there was nothing I could do - no where to run, no other people around, no secret ninja moves up my sleeve. After about a quarter mile, I finally stopped running altogether hoping that the driver would just pass. He slowed down next to me and made eye contact. He got in front of me a short distance, pulled over and stopped the car. At this point in time, I was freaking out.


HOLY SHIT. What am I going to do?

At that exact moment, two women that had driven passed circled back and asked me if I was ok. They were watching him follow behind me from down the road and thought it was so strange that they came back to check on me. Guardian angels exist! I ended up turning around while they watched to make sure he did not follow me anymore. 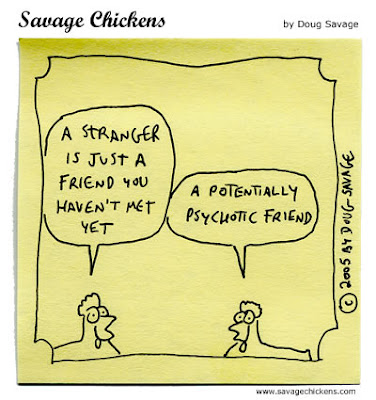 I called the police right away and they wanted to do a formal police report. Even the football player-sized officer was like, "Wow - that is really creepy." And yes - it was. I've never really felt that vulnerable before. But I learned a really valuable lesson about my safety - being aware and prepared is so incredibly important.

Going forward, I vow to follow these safety precautions any time I'm on the road:
1. Stay on main roads with high traffic
2. Let people know the route and when I should arrive back home
3. Carry a cell phone
4. Carry Mace Sport Jogger (If you don't have one - get it today. NOW.)
5. Do not run with headphones
6. Run during daylight hours whenever possible
7. Run with others more regularly


BE SAFE OUT THERE, FRIENDS!