I woke up bright and early on Marathon Monday to catch my bus along Boston Common. I funneled into the lines with what seemed like a million other runners and patiently waited as the buses chipped away at the group. While I waited, I ran mental checklists in my head. Immodium? Check. Bib? Check. Watch? Check...etc.
I was feeling pretty nervous and sad at this point in the day - just because I knew I would be on my own for a looooong time and I didn't know what the outcome of the day would be. Just overwhelming. I made small talk with the people around me in line, "Where are you from?" "Is this your first time?" One of the girls around me was saying that she ran in 2004 and there were sharp-shooters on the rooftops near the bus pick-up, because it was still close to 9/11. I remember thinking how eery that must have been.

Soon enough, we were off! The bus ride seemed to go on forever. We actually had to pull the bus over to let some poor, overly hydrated runner off the bus, because she wasn't going to make it to the Port-O-Pottys. She ran off into the woods and we drove off. She eventually ran back to the bus and was welcomed aboard with cheers and clapping. Haha.

When we got to the Athlete's Village, I jumped into a line for the bathroom and managed to eat a protein bar - which was kind of a miracle, because my stomach was a mess. I stood in line for about a half hour with a bunch of other people doing the potty dance. I snapped this photo from my spot in the line - and if you look closely - you will see two spotters on the roof. Again - I thought this was unsettling, but probably just precautionary. I didn't see guns, but they were uniformed gentleman with binoculars. Hindsight makes me scratch my head a little bit. 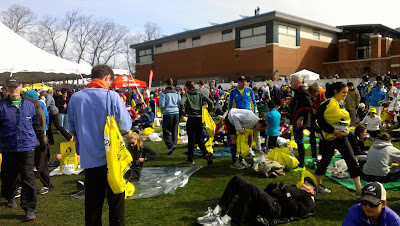 Everyone waited to be dismissed to the Hopkinton starting line based on their Wave. Elites. Wave 1. Me...finally. Wave 2, Corral 1, 10:20. I ditched my gear bag at the appropriate bus and made the march to the start among the sea of runners. I was feeling pretty emotional as we made our way. This is THE RACE - the goal that runners world wide try to reach and here it is, right in front of me. I tried to be mindful of things like that - remembering how much work it took for each of us to get to the start that day and how we would all be making memories and achieving a tremendous goal within a few fleeting hours.

Going into the race, my plan was two-fold: I wanted to match my PR (3:18:45) but more importantly, I wanted to enjoy the race. The course at Boston is much more technically challenging than my hometown marathon, The Lakefront Marathon, which is pretty much flat - so matching my PR from home seemed like a reasonable goal - but still a challenge. 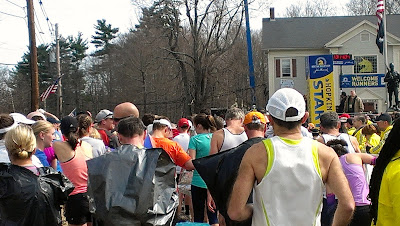 Right on time, the gun went off! Thousands of beeping watches followed as we crossed the starting line. From the beginning, the crowd was amazing - so many spectators lined the streets shaking cowbells, holding signs, clapping and cheering as the herd charged forward. Being in Corral 1, I knew that I would be lined up with the faster runners from Wave 2 - and wow - they went out fast. The first few miles were coming in under 7 minutes - so I knew that I had to heed all of the warnings I had heard: "Don't burn out on the first 13, because it is downhill. Save something for the second half."

Being cautious, I decided to pull back from the group. Rather than attempting to maintain 6:53, I dropped back to a more conservative 7:13 - 7:20 range, depending on the terrain. (Let me clarify this "downhill" talk for anyone that hasn't run the Boston Marathon yet, but plans to in the future. It is an overall drop in elevation, but there are plenty of inclines in that first 13 miles. It is downhill, but don't be fooled: it is a rolling downhill.)

I felt really strong, so I just kept my pace within a comfortable range and tried to pay attention to my surroundings. The spectators were handing out all sorts helpful things: oranges, popsicles, water, gatorade, petroleum jelly. I went out of my way to read the signs, to engage with the crowd and to slap as many high fives as possible. I ran the entire 26.2 miles along the far right side of the course for that reason - gave as many high fives as I could. I am certain I added a couple minutes because of it, but I really don't care; I had so much fun!
After passing the craziness at Wellesley, I got into a zone. My splits were really consistent and I was on pace to come in under my goal time. I got a little confused around Newton, because I couldn't tell when I was on something considered a "hill" and what was just a moderate incline - so there were a few times when I thought I might be done with the Newton hills when I actually wasn't at all. The hills did affect my times, but not that much. Every time I hit a hill, I repeated my mantra in my head "Equal effort, not equal pace. Equal effort, not equal pace." It helped. Finally, I saw the sign that said YOU'VE MADE IT UP HEARTBREAK HILL! I am pretty sure I cheered or fist pumped when I passed by that sign. Hell yes, I made it up Heartbreak Hill. TAKE THAT!

Everything was fine until Mile 24. Up until that point, I felt great - but Mile 24 - ugh. My left quad was trashed. I felt a little frustrated, because I thought I was going to PR. I watched that goal disappear with the reality that my left leg was more like a tree stump than anything else. Although frustrated, I didn't feel defeated at all. It was kind of like, "Well, your time will be close to your PR anyway - so just enjoy the rest of the race." The bum leg gave me permission to absorb the last few miles with less pressure, more clarity.

That was particularly helpful when I rounded the final corner to the finish. The noise was tremendous. I smiled, waved, got a little choked up as I made my way through those final strides. I crossed the line with my hands raised in the air. 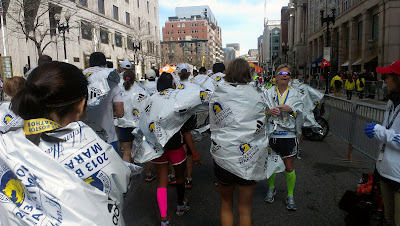 Part Three: After the Finish - TOMORROW