Greetings: In Search of an "Impressive Run"

Hello! Let's begin with the obligatory "welcome to my blog and this is why the blog exists" post, shall we? 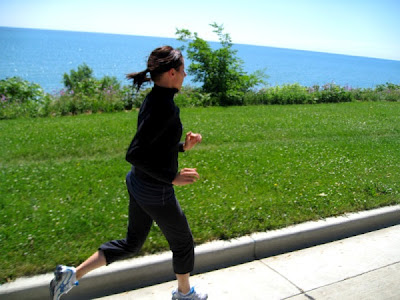 First of all, I am a runner. I've been a runner since I was about seven years old when I saw my dad go "jogging." Of course, my style of running is nothing like my dad's, since his included no shirt, denim shorts and I swear he carried a boom box on his shoulder. (I think my memory is failing me or maybe he was epically cool in the 80s.) So - yes - I have had a long love affair with running, but this blog is mostly meant to keep me on track with my running goals. A tiny bit of the blog's purpose is spite. Yes, spite. Do you have a second, because I would like to tell you a story of triumph, humiliation and sweet revenge.

Let's get the basic background information out of the way, so you can follow along with ease.
Since I had been running about 30-40 miles a week for the last fifteen years, I randomly decided I would compete in my hometown's sweetheart race, The Lighthouse Run. With only one week of "training" specifically for the event, I took 4th place in the 4 mile race. Shocked and really freaking excited, I started training for this year's race - the 2012 Lighthouse Run. 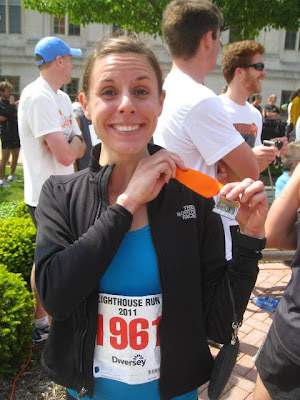 With one year to train, I set the goal simply to beat my time from last year (26:51 - 4 mi.) I upped my mileage a little bit and included Insanity (which was accurately named.) When I stepped up to the starting line the following June, I felt confident but I did not expect that I would win. I actually won. SAY WHAT? Not only did I win, but I achieved my goal and beat my time from 2011. They gave me a freakishly large trophy of a handsome woman and a $100 gift card to Foot Locker. I was so excited, until...(drum roll)...the newspaper article about the race came out at 11PM that night. 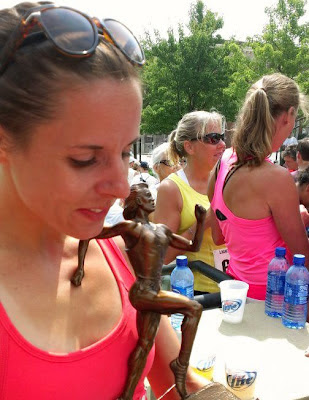 You can read the article for yourself here but the Cliff Notes version of it is this:

I won the race; however, the time was "not impressive." In fact, I set the course record for having the slowest winning time in the history of the event. Slowest champ of ever.

I was beside myself when I read that article online. I didn't know what to do, so I just sobbed. Suddenly the giant, handsome trophy in my living room was mocking me. "Look at this big, stupid trophy you get for being the slow champ! Ha Ha Ha" Something that should have been really awesome and only fun quickly became a source of embarrassment. How fair was it to compare my little silly race to the previous winners, including the likes of college athletes on track scholarships or Jenny Crain (you know - the elite USATF runner?) I moped around for exactly one day - and then, I got pissed.

Maybe, I shouldn't say "pissed;" I felt slighted and that something I worked hard for had been kind of taken from me. More than anything, I felt motivated. If my run was not impressive to the reporter, I would have to get impressive - which is why this blog exists: I am in search and in training for an impressive run.