How has running changed your body?

Like the rest of the running world, I fell in love with the comic "The Terrible and Wonderful Reasons Why I Run Long Distances" from The Oatmeal. 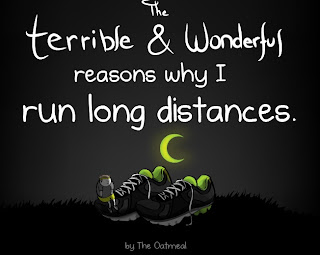 I think the "comic" struck a chord with a lot of runners, because it was so honest in its comedy. Someone once told me that the funniest things in life are the truest things. I'm sure that every runner found a number of quirky observations made by The Oatmeal that made them say, "Yeah, no kidding" or "I do that, too!" I certainly had a number of moments like that when I read through it. One of the illustrations stuck out to me a little more than the others and I thought it would make for an interesting conversation between runners. 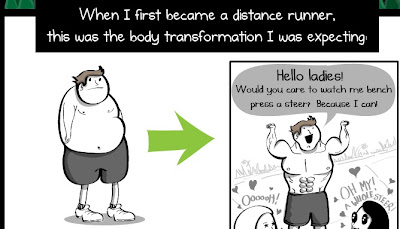 It made me think: what was the body I wanted running to give me? How does the body I earned compare to that image? 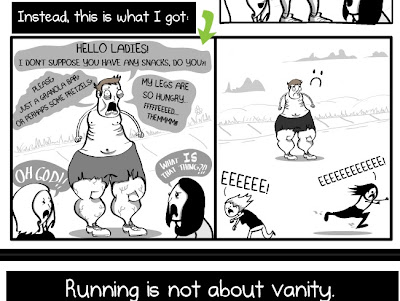 I think I expected to become rail thin with long limbs and defined muscles like a sinewy ballerina. I thought I'd get to keep my boobs and my ass would be perfectly hard and round like an Olympic sprinter.

I probably don't need to say this, but those things didn't happen just how I expected them to. I did thin out, but part of the cost of "thinning out" is losing boobs. Another place I have lost weight is in my face; my cheeks used to be much fuller. Sometimes, I feel like I look like Skeletor with sunken in cheeks.

My waist and hips are narrower - but my thighs are huge from hills, plyometrics and an early life as a sprinter/jumper. There are pros and cons to big thighs because they are strong, but my skinny jeans hate them. Chafing is a problem. When I was running last week, a guy yelled "That chick has legs like an effing horse." I took it as a compliment (I guess,) but still...a horse? My muscles are more defined in general. I like that you can see shapes in my arms, my shoulders, my back, my calves and yes - even my butt. I totally check these things out in the mirror and take vanity shots to compare my progress. You should too.

So while the changes in my body aren't exactly what I pictured, I'm happier with the way it has turned out. My body looks and feels strong - and it will continue to change. Let's not forget the best part - our bodies are able to do some pretty amazing things because of running and the work we put in.


What about you? How has your body changed? Are those changes what you expected?
Posted by Michelle at 12:00 PM